One of computer gaming's biggest titles makes its return with the release of Prince of Persia: The Sands of Time. The classic story, which had players guiding a young prince through a trap-filled palace to save his beloved from marrying an evil vizier, has been updated with 3D graphics and new traps and puzzles. The story begins with the titular prince tricked by a vizier into using a mystical dagger to release the Sands of Time from an hourglass. With the help of an ally, players must right this wrong by recapturing the Sands of Time before the deceitful vizier can harness its power.

As players explore each room, from an ornate reception hall to an underground foundry, they will be able to perform a number of acrobatic moves to protect them from harm. As in previous games, cinematic cut-scenes help tell the story as the prince overcomes a number of deadly traps and enemies lurking inside the Persian palace. Developer Ubi Soft Montreal, best known for its work on Tom Clancy's Splinter Cell, has worked closely with the original game's creator Jordan Mechner for this new tale in the Prince of Persia series.

Gamers who only got into the hobby recently and are only familiar with the nastiness of the recent Prince of Persia 3D might be puzzled about why many old school gamers like myself are so excited at the revival of the Prince of Persia franchise. Suffice it to say that our love stems from the memories of the first two Prince of Persia games - brilliant combinations of side-scrolling action and puzzle solving that quickly became classics. Still, whether you're an old fogey like me or a young kid just starting up in the gaming world, Prince of Persia: The Sands of Time belongs in your collection. Ubisoft has helped the Prince make the transition to the 21st century in grand style.

The Sands of Time finds our nameless Persian hero traveling through India in the company of his father. While there, they take advantage of a sneaky vizier (is there another kind?) to launch an assault on an unsuspecting maharajah's castle and steal an extraordinary artifact: an hourglass containing the titular 'Sands of Time.' Returning to Persia, the Prince gets tricked into smashing the hourglass containing the sands. This pretty much FUBARs the whole region, turning its denizens into bizarre sand-filled monsters and putting a serious crimp in the Prince's day. Now, he has to track down the evil Vizier, collect all of the sand, and somehow defeat the Vizier to put everything back the way it's supposed to be.

That task is much easier said than done. The castle that the Prince finds himself in has an elaborate security system that I'm pretty sure wasn't standard issue for 9th century Persian palaces, but nonetheless stands between him and the goal. Said system includes a whole bunch of elaborate traps including saw blades, spring-loaded scimitars, spikes, and much more. Add in the damage that the castle has undergone when the 'Hourglass of Time' was broken, and you can see the problem. The Prince has to use his extraordinary array of jumps, flips, swings, and leaps -- all animated with amazing beauty and grace -- to jump, roll, and dive his way through the game's levels.

That leads to the game's first strong point -- the level design. Every level of Prince of Persia is a fiendishly designed deathtrap, and figuring out the right combination of moves, jumps, and tricks that will get you up to the other side makes up the majority of the gameplay in Prince of Persia. Had the level design (or the controls) not been up to snuff, it could have been a disaster. Fortunately, that didn't happen and solving these puzzles is tremendously enjoyable.

The Sands of Time is also quite forgiving when it comes time to make your moves. While a simple slip-up can send you to instant death at almost any time, the 'Dagger of Time' the Prince carries has the ability to rewind the last ten seconds of the game, meaning you can instantly 'undo' your death and try again. It's obviously a way to get around the traditional 'save and restore' rollercoaster that games like this get into, but the way it's done -- including the slick graphical effect that accompanies it -- is nothing short of brilliant. Including the rewind option lessens the inevitable frustration that these 'die and retry' games seem to cause.

It's worth noting that the PC version of The Sands of Time does not contain gamepad support -- the only way to control the Prince's movements is via a keyboard and mouse. This is an extremely puzzling omission, especially for anyone who's played a console version of the game. Oh, don't get me wrong, the Prince is perfectly controllable on the PC and players shouldn't have any difficulty getting the hero to do what they want, it's just that, after trying out the game with a PS2 gamepad, I found the PCs keyboard controls a little looser and sloppier. It's really only an issue for players who have tried both, though. Players who've only used the PC version probably won't notice it.

Traps aren't the only obstacles the Prince has to face. Remember those sand-filled creatures I mentioned? It turns out that they have a serious attitude problem, so the Prince is going to be spending a lot of time hacking and slashing and collecting sand from their withered corpses. It's easy to see why, of all of Prince of Persia's features, the game's combat has drawn the most criticism. The combat system isn't terribly elaborate and can feel a bit 'clicky' as the Prince only has a handful of moves (including Dagger powers that freeze enemies in place or make everyone else move in slow motion). It can also sometimes feel like the game piles on way too many enemies as a way of artificially lengthening the game.

Still, despite the simplicity, I found the game's combat fun. The four-on-one fights make a nice break from racking your brain trying to solve yet another room-sized puzzle. They even involve some strategy as certain enemies are immune to some of the Prince's moves, and you'll need to maneuver yourself into position to hit one enemy without getting nailed by another. It also helps that the game's gorgeous animation makes the fighting look so damned cool.

In a triumph for lovers of a good storyline, Prince of Persia's story isn't limited to an opening movie and an ending cutscene. As you travel through the castle, the game is liberally peppered with the Prince's past-tense voiceovers and cutscenes explaining what's happening as if he was relating an Arabian Nights tale. Early in the game, the Prince hooks up with an Indian Princess who's integral to the plot, and their story (if not terribly elaborate) is well-written and scripted and provides a nice context for the action. The ending twist of the game is pretty cool, too.

Indeed, everything about the game works together to feel like an Arabian Nights tale. The game's music is an enjoyably skirling and twirling collection of pipes, drums, and flutes that wouldn't be out of place in an Egyptian bazaar. The graphics, too, are wonderful. While the environments themselves are beautifully rendered, what really sells the experience are the wonderful special effects like elaborate lighting, swirling dust, haze, shifting curtains, and well-designed characters and monsters. This, in particular, would be a reason to pick up the PC rather than the console version. The higher framerates and extra graphical power of the PC blow away the console versions.

In fact, there are really only a few flies in the ointment. One is replayability: While it's a lot of fun figuring out how to get past each room the first time around, there's not much appeal in doing it all again once you finish the game and know the sequences for each room. Sadly, the PC incarnation of The Sands of Time doesn't have the original Prince of Persia games available as unlockable bonuses or Easter Eggs, as is the case with the console versions. There is a cute 3D version of one of the original Prince of Persia levels, but, unless you know the originals, this plays out as merely a secret level. Frankly, as an old-school gamer who played the originals, I would much rather have had the console bonuses.

It's hard to think of any major reasons to discourage anyone from picking up Prince of Persia: The Sands of Time, though. When you consider that this was a series that everyone thought was dead and gone, Ubisoft has done a remarkable job in restoring the Prince to his former glory. Mabrouk and chokrane!

How to run this game on modern Windows PC? 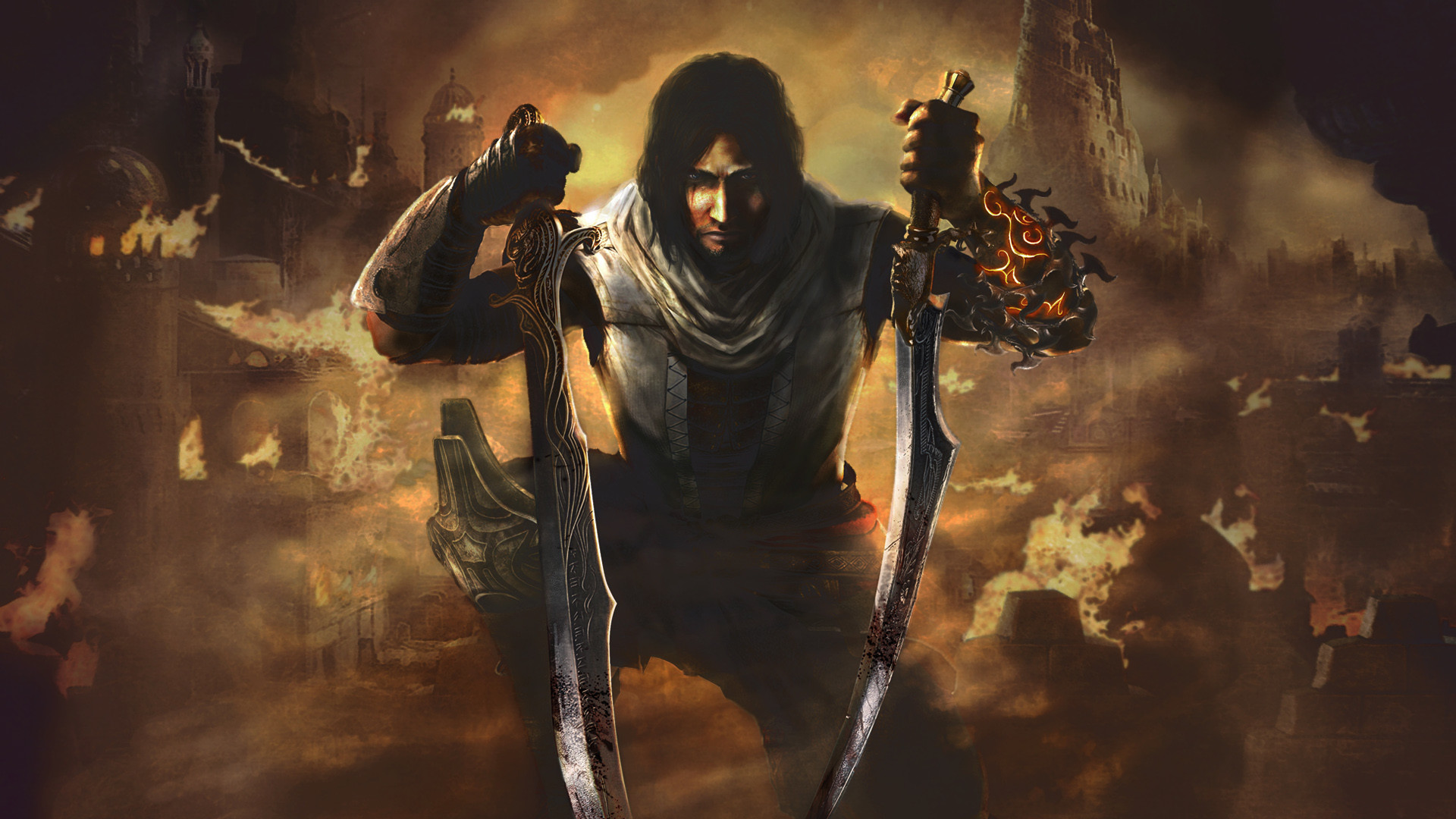